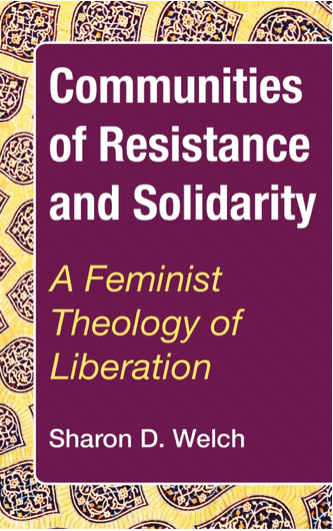 Book Review – Communities of Resistance and Solidarity: A Feminist Theology of Liberation by Sharon D. Welch

Dr. Sharon Welch is a Unitarian Universalist feminist liberation theologian, who self-identifies as white, female, and owning class. Just as she is transparent about her social location, she candidly claims her double identity of oppressed and oppressor, a dual identity many of us share—if we are honest.

In her book, Communities of Resistance and Solidarity: A Theology of Liberation, Welch addresses the role that religion plays in fostering liberation and maintaining oppression. In her book she seeks to develop a personal understanding of a liberating mode of theological reflection.[1] According to Welch, theology is important because it determines the type of response the church makes to particular social and political crises; it therefore shapes the nature of human community and human belonging in the world. One of the goals of liberation theology, as Welch views it, is to disclose and challenge oppressive theological concepts, dictatorial church structures, and exploitative social/political institutions. The liberation theology that Welch practices “is not based in academia, texts or literature, but in actual communities in the concrete experience of women and men struggling to build a new world… a community that appropriates the Christian tradition in the context of political and social struggle.”[2]

Welch examines the status of the political interpretation of the Christian faith. She cites numerous theologians that resist the complicity of Christianity in oppressive circumstances, including James Cone, Black liberation theologian, and Mary Daly, feminist theologian. Naturally, Gustovo Gutierrez, the patron saint of the oppressed, is among the liberation theologians that Welch frequently quotes. Welch invites liberal theologians to examine the adequacy of their language about God. She asserts that liberal theologians have not yet discovered the evidence and arguments to establish with certainty the reality of God. Welch grapples with Christianity’s complicity in the oppression of women as one of its moral inadequacies. Furthermore, she cites Christianity’s participation in witch burnings, the Inquisition, the Crusades; their justification of imperialism and colonialism, and the perpetration of sexism, racism and anti-semitism, as historical examples of Christianity’s complicity with oppression.

She poses important questions for the reader to grapple with and reflect on, some of which she answers. “Is Christian faith itself a dangerous mark for relations of domination?” This is one of the many provocative questions she poses.

She ponders a truly gut-wrenching question, “Where was the liberating God in the Nazi holocaust, Vietnam, Hiroshima-Nagasaki, and the torture of political prisoners?” Welch reminds readers that these atrocities were carried out through the active and passive complicity of “good Christians and solid citizens,” thus she questions the “fundamental morality of Christianity.”

Welch boldly addresses these stark contradictions in Christian practice and beliefs, and raises still another question: “What does it mean to believe in a gospel of love, justice, and peace when a Christian head of state, General Rios Montt systematically and brutally exterminated the Indian population of his country, Guatemala?”

Welch draws heavily on the theories and teachings of Michel Foucault, the French philosopher, historian, writer, political activist and literary critic. His theories primarily address the relationship between power and knowledge, and how they are used as a form of social control through social institutions. During his lifetime, Foucault was committed to challenging oppression and was self-critical in his application of theory and practice.

Foucault asserts that each society has a regime of truth—the types of discourse which it accepts and makes function as true. According to Welch, Foucault does not accept that there is a single human way of knowing. Furthermore, he asserts the experience of order is not a static given, nor a secure basis for thought or action.[4] The recognition that the struggle for knowledge and its dominance can dictate “who will live and how, and who will die and for what grand cause” is significant in attaining dominance. Whoever establishes and controls “truth” gains control of the narrative about oppression and the oppressed, and can dictate whether liberation theology—the solution posed by Welch—is embraced or rejected. Welch extensively explores Foucault’s correlation of power and knowledge which in her opinion provides a grid through which various operations of power may be examined.[5] Hence, she raises intriguing questions about power and control:

Welch thoroughly examines the relationship between power and knowledge. She reminds us that knowledge provides access for those in power to use against the oppressed. Oftentimes it is challenging to determine where Foucault’s theories end and begin, and when Welch is imparting her own ideas. She engages so intimately with Foucault’s theories, attempting to move the reader along the vast and complex theories Foucault articulated over his lifetime. Welch and Foucault remind the reader that a new body of knowledge brings into being a new class of people who can exercise a different kind of power. For instance, a ruling class generates an ideology that suits its own interests. However, if a new ideology creates space for a new ruling class, can the marginalized and dispossessed assume power—and would they be considered “ruling class?” Could they rule justly and fairly? Liberating systems have to express concern for the well-being of all people and to care about justice for all groups of people.

Dr. Sharon Welch’s book, though short at just one hundred pages, is not light reading. But it is well worth it, and in my opinion, should be required for any liberation theology course. In her distinct scholarly manner, Welch systematically presents and proves her hypothesis that Christianity has been complicit in aligning itself with systems of oppression. She further asserts that the failure of Christianity is not its false or unrealistic claims, but its failure to claim enough. Christianity failed in Welch’s opinion, not in its practice to “transform the corruption and inhumanity of the world but in its practice of the vision of the human community.”[6] Welch maintains that liberation theology is a possible solution to build a new world that shapes the human community. While it is reasonable to question whether the oppressed can exercise a different kind of power to rule justly and fairly, Welch and Foucault assert that the ruling class cannot be left to the creation of knowledge which shapes the very existence of society, and that inevitably influences the lives of its people. The narrative about a society’s existence and its people must be based on the experiences of diverse races, genders and classes, and not solely on the experience of any one of these.

The struggle for knowledge and dominance does not have to lead to corrupt systems of dominance that create marginalized groups. Liberation theology, Welch would assert, is capable of building a new world; this may very well be the topic of her next book. While she poses as many questions as she answers, she does not profess to have all of the solutions. Her questions demonstrate her scholarship, clarity, and vision for the just and whole world that we as Unitarian Universalists profess to embrace. They provoke the reader to seek solutions and dive deeply into creating just and humane systems.