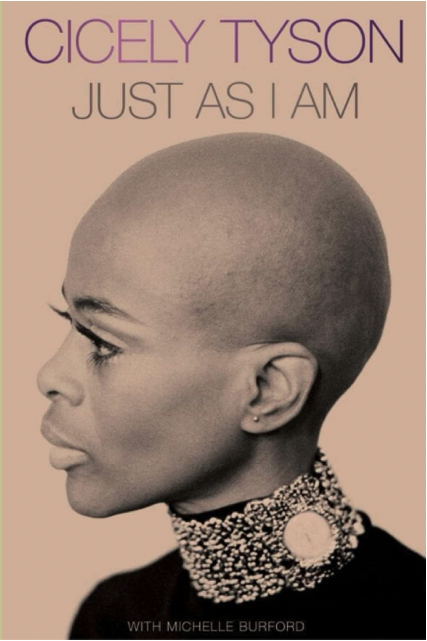 Book Review – Just as I Am by Cicely Tyson

Cicely Tyson’s book, Just as I Am, represents her final words to the world and her fans, her closing act. Cicely Tyson died January 28, 2021, at 96 years old. She died the same year her book was published. So it is her finale–her tribute. I am happy that she was able to narrate and take control of her parting story and message. So often, Black women, particularly high visibility Black women, are not in charge of nor are they able to control what is said about them, nor are they able to proclaim who they are. This book accomplishes that for Cicely Tyson.

We all hope to leave our mark on the world, a legacy that proclaims our unique existence. Cicely Tyson’s book chronicles her triumphs as an actress and human being, as well as the challenges in her life. We have the master storyteller sharing a rare window into her life. She tells all, beginning with her humble childhood, a scrawny child born with a heart murmur. Her parents were told she would probably not live three months. She writes freely about the difficult relationship she and her mother shared, her devout love for her father, her parents’ divorce, her siblings, and extended family, and everything in between.

At six months of age a kindly Jewish woman approached Cicely’s mother and leaned into the carriage where little Cicely lay nestled. The stranger spoke these words: “Take care of that child. She has a sixth sense. She’s going to make you very proud one day–and she’s going to take care of you in your old age.” And then she proceeded to walk away.[1] More prophetic words could not have been uttered.

My primary reason for reading Tyson’s book was to gain some insight as to how she understood and dealt with the abusive relationship that she was in with Miles Davis. I wanted to explore how they got together and the nature of that mismatch. As a survivor of child abuse, domestic and sexual violence I wanted to better understand the choices Tyson had made about her relationship with Davis. She clearly knew how to select films where she embodied her strong characters’ stories, that captured profound social statements championing empowered women, their trials and struggles in the face of adversity. She had the ability to possess our hearts and emotions. I saw in Tyson a brilliant woman that became prisoner in what started out as a loving relationship and eventually became abusive. In some ways I saw myself in her.

I was curious to see if she would address her own abuse in her book. It had been rumored over the years that Miles Davis was abusive to Cicely Tyson. But it was not until poet and playwright Pearl Cleage dedicated a collection of poems titled, Mad at Miles: A Black Woman’s Guide to Truth, that it became real and no longer a rumor. Cleage wrote about her own decision to put away Miles Davis’ music, her LPs that she loved, and to speak out against his violent abuse of Tyson. Cleage reminded readers that her actions should not be labelled “man bashing” but instead, love. While her small and provocative book was published in 1990 it is equally relevant today.

Tyson, to her credit, holds nothing back. She brings the reader into her tumultuous relationship with Davis and his struggles with his drug addiction. Tyson’s celebrity status, money, and powerful ties are not enough to save her from the tragedy of her abusive relationship. Like many victims of domestic violence Tyson left and returned to the relationship, probably hoping Davis would change. Perhaps she even believed she could change him as many battered women erroneously assume. Some sources assert that it takes a battered woman an average of six times before they successfully leave their abusive relationship. I did not attempt to count the number of times Tyson left and returned, even eventually marrying Davis. My focus on Tyson’s actions is, in no way victim blaming, it is a reminder that a woman’s social economic status does not protect her from abuse. A woman’s brilliance and stable career do not protect them.

Too often we ask the wrong question. Instead of asking why she stays (or returns) we should ask, “why does he batter?” Having worked as an advocate to address intimate partner violence for over twenty-five years remnants of my internalized oppression still cause me to examine what I did to end up in abusive relationships and what I could have done differently. So often battered women question the choices they made. And that is important. But it should not take away the batterer’s responsibility for the violence.

If I am guilty of scrutinizing Tyson’s actions with all my experience as an advocate, then imagine the average woman (and man) that is critical of the woman rather than focusing on the man’s behavior and society’s justification of men’s behavior. “She should have known better;” “She must like it or she would leave.”  Miles Davis possessed two demons–his violent behavior and his substance abuse. Too often we feel if the man gets help for his substance abuse he will cease his abuse. They are two separate issues.

For all Tyson’s reflections about her relationship with Miles Davis, the one comment she wrote that was most telling was, “…[O]nce Miles stumbled back into my world, I learned just how much of a father wound I was still carrying.”[2] To be clear, Tyson may have had daddy issues but that does not justify or explain away Miles Davis’ violence.

Tyson made two statements in her book that provide a glimpse into the troubling racism and colorism that contribute to the self-hatred which begins for many little Black girls at a very early age:

“…No one had to tell me that the fairer your skin and the narrower your nose and lips, the more stunning you were considered…Caucasian women were upheld as the standard of beauty while our features were denigrated…Black hair was portrayed as unkept, a crop of wild irascible wool that required taming…”[3]

“In the life of every Black child, a moment arrives when he or she becomes wrenchingly aware of how we are perceived.”[4]

And yet, when little Black girls have examples of brilliant Black women it can plant the seeds of greatness and possibility in them. Viola Davis, iconic actress in her own right, penned the forewords to Cicely Tyson’s book and her reflections of when she saw Tyson for the first time as a child on TV:

“… [the] TV that rested upon another broken one, a set with aluminum foil on its antennae for better reception…I can pinpoint the exact moment when my life opened up…It planted in me a seed that immediately took root…She was the manifestation of excellence and artistry, a dark-skinned, thick-lipped woman who truly mirrored me…With one mesmerizing performance, with one gorgeously poignant rendering of her character, Ms. Tyson gave me permission to dream.”[5]

Tyson was a brilliant and complicated human. She demonstrated her brilliance in her star- studded portfolio with films that have brought so much joy to so many. And she is brave enough to allow her readers to accompany her as she reveals her life for all to see. The only place Tyson appeared to tread lightly was her relationship with her daughter, Joan. However, her sparse but poignantly penned words convey volumes, “Joan and I continue to work on our relationship, as fragile as it is precious, and even as I write of her in my story, I leave space for her to one day share her own.” Just as Tyson wanted to be the narrator of her journey, she also reserved the right for her daughter to speak her truth and tell her story.

Cicely Tyson, you paved the way for those behind you. Your shoulders are the strong shoulders that so many drawn to theater have stood on. You portrayed the struggles of Black women with such grace and dignity. You made Black beautiful. You elevated our struggles with your screen presence. We proudly embrace you! You shaped the course of history and you have left the world more beautiful and richer by your presence. Well done, my sister. Well done, thy good and faithful Queen Mother. You lived a full life with the many ups and downs of a Black woman in America. You invited us into your life with the same raw truth and energy portrayed in the characters you embodied.

Tyson’s book is over 400 pages long and two inches thick. It is worthy of your time! Grab your favorite lounging spot, beverage and snacks and let her seduce you one final time, drawing you in to her complicated, messy, heroic and real world.