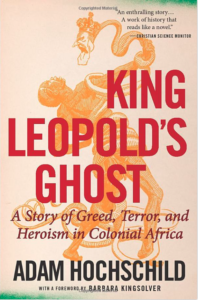 The legacy of colonialism in Africa, whether accompanied by decades of armed struggle or negotiated transfers of power, still carries the vestiges and imprint of colonialism’s shameful exploitation and plunder that robbed African nations of their natural and human resources and plunged them into poverty, corruption, and spiraling economies. While on the surface one might surmise that many colonized nations benefitted from the educational efforts of zealous missionaries, there was a price to pay for this exchange. Jomo Kenyatta acknowledges this history, “When the Missionaries arrived, the Africans had the land, and the Missionaries had the Bible. They taught us to pray with our eyes closed. When we opened them, they had the land, and we had the Bible.”[1]

Adam Hochschild’s skillful research and writing reveal a compelling chronicle of King Leopold’s “death toll of holocaust dimensions” that galvanized the first great international human rights movement of the twentieth century. His book is not for the faint hearted. Hochschild reveals some of humanity’s most shameful acts of aggression and carnage in his description of the wretched existence of the Congolese people under the reign of King Leopold II of Belgium from 1885-1908. Hochschild brings the reader face to face with evil. It is not merely Leopold’s evil actions alone, but Hochschild’s revelation of the many co-conspirators who sought wealth and riches by decimating an entire region and its people. King Leopold II began his evil deeds under the guise of a humanitarian veneer. It was with a cunning calculation that he set about to own a colony from afar and extract wealth and live a life of luxury. According to Hochschild, King Leopold II did not build one single institution during his tyrannical reign. Yet, for all the money King Leopold II extracted from his plunder of the Congo all he had to show for it was private residences built for him and his mistress. Hochschild refers to King Leopold II as “foxlike” because he was able to become the totalitarian ruler of a distant and vast empire, the Congo. He appeared to have few, if any, redeeming qualities according to Hochschild.

While the Congo’s story is a painful read, it is also inspiring to learn about the two African Americans, George Washington Williams and Reverend William H. Sheppard that exposed King Leopold’s dastardly deeds. Williams, a lawyer, historian, and journalist wrote the first full account of Leopold’s rape and plunder of the Congo. Sheppard, a Presbyterian missionary, and explorer, was the first outsider to visit the capital of the Kuba Kingdom and subsequently documented the atrocities. As a result, Williams and Sheppard became the target of King Leopold’s vengeful ire. Sheppard ended up in court, the focus of a lawsuit and trial. E.D. Morel, an Englishman, waged the most protracted and effective campaign against King Leopold and eventually alerted the world to the evils and brutality taking place in the Congo.

How can one comprehend what Hochschild named as “officially sanctioned terror?” Hochschild contends that it was the role that “functionaries” played in the diabolical scheme to plunder the Congo that allowed King Leopold’s reign of terror to continue. Hochschild further asserts that functionaries are always “ready to believe and to act without asking questions.” But perhaps even more alarming, these individuals believed that Africans were not human beings:[2]

“To Europeans, Africans were inferior beings: lazy, uncivilized, little better than animals. In fact, the most common way they were put to work was, like animals. As beasts of burden.”

When someone renders another human being, and in this instance, an entire nation of people, as less than human and dehumanizes them they become objects and can therefore be subjected to unthinkable acts. Hochschild asserts that,[3]

“In any system of terror, the functionaries must first of all see the victims as less than human and Victorian ideas about race provided such a foundation.”

Albert Bandura, author of “Moral Disengagement in the Perpetuation of Inhumanities” and author of several research studies on human behavior contends that it is, “easier to brutalize people when they are viewed as low animal forms.”[4]

Hochschild bemoans the fact there is so little documentation of the historical resistance of indigenous leaders and their people globally. He attempts to share some acts of heroism of the Congolese. Overall, he is to be commended for his thorough and rigorous research that provides a lens on the carnage that took place in the Congo, beginning with the thirteen million that were murdered under King Leopold’s reign that the Congolese scholar, Isidore Ndaywel e Nziem, identified. To that number add another four million fatalities from the subsequent civil war and another two million refugees rendered homeless, destabilized, and traumatized. We are easily talking about almost twenty million individuals over the course of time.

An important issue that Hochschild failed to examine is the effects of colonialism on women. Amina Mama, author of Sheroes and Villains: Conceptualizing Colonial and Contemporary Violence Against Women in Africa, traces the genealogy of violence against Black African women in part to imperialism and colonialism.[5]  Mama contends that the colonial period increased the vulnerability of African women to various forms of violence from both European and African males. While Hochschild failed to provide a gender analysis of the plunder of the Congo, his research uncovered some observations that allowed this researcher to extrapolate data and draw certain conclusions. For example, a common strategy used by Belgians was to hold the women hostage to force their husbands to go into the rain forest to gather wild rubber. The use of gender-based violence, that is, intimidation in this instance, is a form of violence that recognizes and uses the status and power of women in the Congolese society. It also strikes at the heart of a society’s basic unit, that is the family, and manipulates the bond between husbands and wives for ill gain.

Still another controversial gender issue is the role of colonial white women in settler communities. Their unique status has been the subject of research widely recognized by scholars in studies of white settlements in colonial settings. With the arrival of large numbers of white women, there came the necessity for their protection and a clear demarcation of racial boundaries. The white women supposedly needed more amenities and native helpers to release them from the burden of household chores. Ann Laura Stoler contends, “White women need(ed) to be maintained at elevated standards, in insulated social spaces cushioned with the cultural artifact of being “European.” On the one hand, they were charged to reproduce Western domesticity in a strange land and to be guardians of Western morality and religious piety and to pass these on to the young. On the other hand, they were described in several studies as clinging more to their class and racial privileges, while displaying more racial intolerance than even white males. Their abuse of their Congolese servants and their jealousy of sexual liaisons between white men and native women widened the racial gulf and created rifts and tensions with the locals as well as divisions among the whites themselves. The reactionary behaviors of white women and the social divides created have been interpreted by some as contributing to the difficulties and eventual breakdown of colonial rule. While this researcher refutes such a simplistic theory what might be closer to the truth is that those factors combined with local resistance efforts, international pressure, and strong advocacy inside and outside the Congo eventually brought down the colonial reign of King Leopold.

Unfortunately, the rape and plunder of the Congo did not end with King Leopold’s reign but continued with a local military dictator, Mobutu Sese Seko, who served as President of the Democratic Republic of the Congo from 1965 to 1997.

We owe a debt of gratitude for the scholarly works of Adam Hochschild, Amina Mama and Ann Laura Stoler who represent a growing number of researchers whose efforts have unearthed the sordid role of colonialism and its lingering effects on African peoples. May Africa continue to resist and heal from the ugly legacy of colonialism.

[1] Jomo Kenyatta was a Kenyan anti-colonial activist and politician that served as Prime Minister of Kenya from 1963-1964. He went on to become Kenya’s first President, serving from 1964-1976.