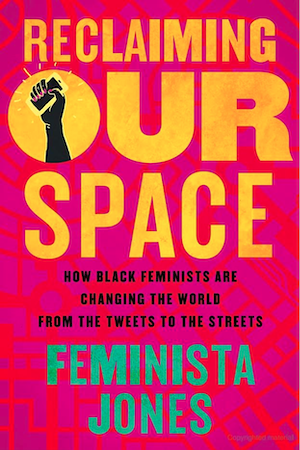 Book Review – Reclaiming Our Space: How Black Feminists are Changing the World from the Tweets to the Streets by Feminista Jones

The author, Feminista Jones, adopted her name in homage to Cleopatra Jones, the female  character in Black exploitation movies portrayed as a “hard-hitting-no-nonsense” ass kicking-karate-chopping-take-care-of-business Black woman. The real life Feminista Jones is a Philadelphia-based social worker, feminist writer, public speaker and community activist named one of the 100 Most Influential People in Philadelphia and one of the Top 100 Black Social Influencers by The Root. She has been featured in the New York Times, Washington Post, Time, Essence and Ebony magazines.

Her book, Reclaiming Our Space: How Black Feminists are Changing the World from the Tweets to the Streets explores how Black women are engaging social media to effect change and to heighten the exposure of feminist thinking and practice. Black women’s use of social media has created iconic hashtags like #BlkLivesMatter, #SayHerName and #BlkGirlMagic. It appears that academia and educational institutions are no longer the primary avenues for introducing and discussing Black feminism. Instead, online dialogues facilitate and complement traditional contexts such as kitchen table talks, salons, forums, conferences and other face-to-face settings (pre-digital formats). Jones comments on social media’s exposure of Black women to Black feminism, “The ways in which knowledge is created and shared has transformed in large part due to the explosion of digital media, and Black women have been trailblazers in this new digital landscape.”[1]

Among the two dozen hashtags highlighted in a 2016 article as influential in shaping feminist discussion, ten were created by Black women according to Jones.[2] Furthermore, Jones notes that #BlackLivesMatter was popularized and grew into a global movement by three Black activist women, Patrisse Cullors, Alicia Garza and Opal Tometi.[3]

Still another example of the power of hashtag feminism is #YouOkSis. This particular campaign highlighted street harassment of women and girls. Another campaign, National Moment of Silence in 2014 was launched on August 10, 2014 $NMOS14. Using twitter, Face Book, and Instagram and working with almost 100 individuals Jones was able to coordinate over 119 vigils in 42 states and five countries that took place five days after Michael Brown was killed.[4]

If readers are not convinced of the power of social media, Jones cites still another campaign, #SayHerName, which honors the forgotten Black women erased in the existing narrative about police brutality and amplifies those Black women that have been victims of police violence. Jones highlights an international campaign to demonstrate the universal reach of social media. #BringBackOurGirls, mobilized a movement created in response to the kidnapping of hundreds of girls in Chibok, Nigeria by the terrorist group, Boko Haram. The movement was initiated by feminist Nigerian activist, Obiageli Ezekwesili. While she was not the first to use the hashtag, its use was inspired by her call to action around the world to bring the girls home. The hashtag according to Jones, “awakened a consciousness about the violence inflicted on women and girls in the region and dominated the news and media for weeks.”[5]

Jones identifies as a Black feminist and a social justice warrior/activist that uses her platforms to “encourage challenging discourse, inspire and motivate people into action and amplify the narratives that often go ignored by the mainstream media, which usually center whiteness and white experiences.”[6]

Jones uses the terms Black feminism and womanism interchangeably. She asserts that Black women have come to Black feminism because they have rejected the racism of mainstream white feminists and the (hetero) sexism of the Black Power movement.

While talk of threads, live-tweeting watch nights, and blogs have brought communities of Black women together, there is a downside according to Jones. Black women end up performing free labor simply by being themselves and because they are tied into underserved populations. By virtue of who they are they bring demographics that marketing executives have either ignored or been unable to attract. Marketers’ surveys indicate that programs that live tweet when a program is airing generate 64% more discussion.

The term “influencers” when used in reference to social media refers to the “power to affect the purchasing decisions of others because of their authority, knowledge, position, or relationship with their audience.”[7] Black women influencers are positioned to potentially be compensated to promote products and services, develop as public speaking on panels and conferences, and write and produce content for household publications. Some Black women have been able to leverage social media to become influential thought leaders, respected artists, cultural critics and content creators according to Jones.

Because of Feminista Jones’ book and her schooling her readers on the influence of social media and Black women’s ability to wield its influence and power towards feminism and social change we will never look at social media in the same way. Enjoy your read!

[1] Feminista Jones. Reclaiming Our Space: How Black Feminists are Changing the World from the Tweets to the Streets. Boston: Beacon Press. 2019. p. 6.

[2] Feminista Jones. Reclaiming Our Space: How Black Feminists are Changing the World from the Tweets to the Streets. Boston: Beacon Press. 2019. p. 33.

[3] While they popularized the hashtag, Dr. Marcus Anthony Hunter first tweeted it on August 20, 2012.

[5] Feminista Jones. Reclaiming Our Space: How Black Feminists are Changing the World from the Tweets to the Streets. Boston: Beacon Press. 2019. p. 32.

[6] Feminista Jones. Reclaiming Our Space: How Black Feminists are Changing the World from the Tweets to the Streets. Boston: Beacon Press. 2019. p. 4.

[7] Feminista Jones. Reclaiming Our Space: How Black Feminists are Changing the World from the Tweets to the Streets. Boston: Beacon Press. 2019. p. 53.