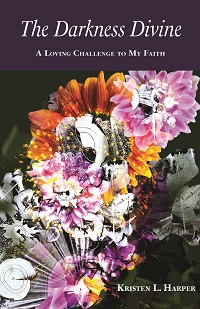 The Darkness Divine: A Loving Challenge to My Faith by Rev. Dr. Kristen L. Harper is a June 2021 publication by Skinner House Books. Not every writer possesses the ability to effortlessly move between genres. Harper reveals in her introduction, “I have been writing poetry for most of my life.”  She demonstrates her mastery of prose and poetry in the 126 pages that include questions after each section. She skillfully takes the reader into some hard places and topics, and with equal aplomb delivers riveting poetry that reinforces her powerful prose. She does not avoid tough subjects like internalized oppression. In her poem titled, “The Greatest Trick: Internalized Oppression,” she opens with the question, “How did you manage to convince so many of us that we were less than?” The poem concludes with images of a people that “no longer bow” but “own who we are, beautiful, powerful, intelligent, worthy, fully human and completely precious.”

Harper names “the harm that white culture has perpetrated on Black and Brown communities and questions how to convey this history to her young niece without wounding her. Every BIPOC mother grapples with these issues of finding the balance of reality and holding hopefulness and a vision of wholeness for their children.

Harper, a bi-racial female, uses the pronouns she, her and is intimately familiar with the concepts she writes about. While her adoptive white mother exposed her to the admirable qualities of Black women and men, she witnessed, read about and experienced racism. And the racism was not always perpetrated by non-UUs. Harper is not hesitant to speak truth about the incidents she encountered in seminary and later from ministerial colleagues. Harper graduated from Meadville Lombard Theological Seminary and received her DMin in 1999. She was ordained and fellowshipped and was among the early Black UU clergy women to enter ministry. She was the second Black woman to be called to a UU congregation as sole minister. The road to ministry was not easy for her and other Black UU clergy women. She is among those whose shoulders many of us Black clergy women stand on and we walk a path made by her and others like her. In her acknowledgments she honors them:

White UUs who have grown tired of efforts to decenter whiteness and to dismantle white supremacy should read Harper’s book. Her stories painfully remind us that not very long ago individuals training for the ministry acted on their racist beliefs. And congregants behaved badly towards Harper and other Black UU clergy women.

The jacket of Harper’s book reveals not only what to expect, but how she does what she does, “(Harper) confronts and unpacks the language, imagery, buzzwords and cultural touch stones that demean and dehumanize Black people…Harper lifts up the strength, beauty and resilience of Black people and outlines a path forward.”

The Darkness Divine embodies the tradition of resistance literature that began with Frances Ellen Watkins Harper and continued by UU BIPOCs with Been in the Storm So Long, a meditation manual of BIPOC voices. Harper’s work lends itself to the cacophony of voices that lovingly and achingly spit truth into the abyss of racial injustice that so often threatens to overpower the joy and celebration that Black women experience. It is that in between of the agonies of a faith tradition that is just learning how to love and appreciate Black UU women and girls that we are holding space. Harper’s publication, The Darkness Divine stands front and center in the small but growing body of works by Black UU women.

And what a joy to receive her publication and to welcome her presence in this wilderness journey of Unitarian Universalist Black women authors.