It is amazing how time flies. I evidently wrote this as I was beginning to put together some reflections of my spiritual journey. Here is what I said:

My spiritual journey has been a long and circuitous one. My spirituality was nurtured early in life through my Baptist upbringing, influenced by my mother’s Southern roots. My mother was a Preacher’s Kid (PK), and so my ten siblings and I had a very religious upbringing facilitated by Greater St. Stephens Missionary Baptist Church. Shortly after I began college I went through my “God is Dead” period. I became a Marxist-Leninist and traveled to Cuba for three months. My sense of social justice as a change agent was being nurtured but I was still spiritually restless. So I continued my journey.

Soon afterward I became a practicing Muslim for ten years. First in the Nation of Islam, then the American Muslim Mission, then the Sunni community and finally, Sufism. Christianity gave me my religious foundation including Jesus, and sacraments such as prayer, worship, and giving. Islam gave me the discipline of praying five times a day, piety and sisterhood. Separation of sexes, that is, purdah, provided a strong compulsion toward the embrace of sisterhood since it was almost the sole social outlet. Sufism and Islam, in general, deepened my spirituality through spiritual practices unique to Islam. And when the prohibitions as a woman and mother became too restrictive and no longer allowed me to express fully who I was, then I moved on. 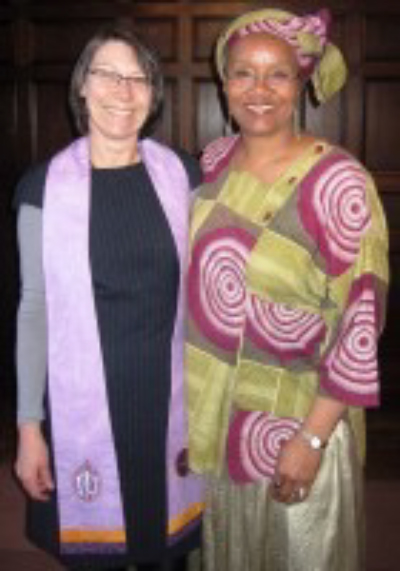 I had the honor of bestowing on the visiting minister from Transylvania the stole she is wearing as a gift from Meadville Lombard Theological School.

My next phase in my spiritual journey I identified as “non-denominational.” Theologically, the church I was affiliated with was non-denominational within Christianity, but not interfaith or ecumenical. So I continued my spiritual journey. Then I found UUism. I knew absolutely nothing about UUism. I had seen flyers over a period of time and they were always connected with social justice issues. As an activist, looking for a new church home I was initially attracted to the strong social justice orientation. But what has kept me UU is the theological diversity. It allows me to bring all of who I am theologically, and the best of each faith tradition I have experienced. UUism encourages me to build my own theology and allows me to reflect on who I am in the world and what kind of world I want to live in. UUism trusts us to build our own theology and to be proactive in learning and growing.
My religious upbringing, my blue-collar background, and experiences with racism, sexism and classism have informed my values and who I am. I have developed a great sensitivity for those less fortunate and I believe we as a community have an obligation to others and to creating a world of justice. So here I am, on the journey toward ministry. And it feels so right. The space and freedom to create a theology that reflects my values and resonates with me are stronger than the challenges of race and class. And so here I am! 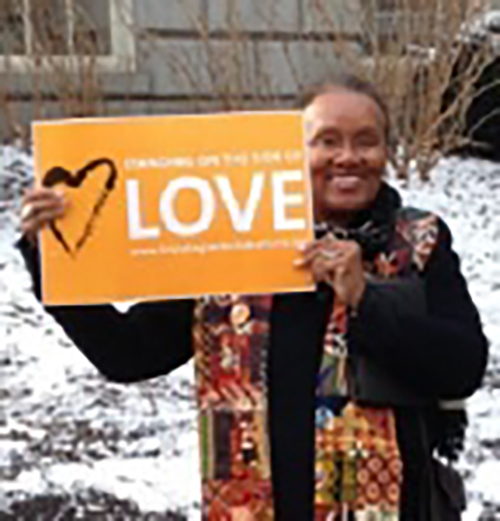